EDITORIAL: As the year draws to a close, Marije Jansen’s zuihitsu introduces us to traditional Japanese New Year rituals as reflected in surimono – and offers us a way to start the New Year in an auspicious manner! Jana Ryndová and Beatrice Shoemaker both look at collectors. Josef Hloucha (1881–1957), the subject of Jana’s contribution, was curator of the Asian and African collections in the Náprstek Museum, and an influential figure in art-loving circles in Prague. Beatrice reworked the lecture on the ceramics specialist Edward Sylvester Morse (1838–1925), which she gave for the SJA in October 2016. Lisanne Kleinjan discusses ways in which machiya, traditional houses with wooden structures, are given a new lease of life as exhibition spaces for contemporary art. And John Fiorillo presents aspects of the work of Sekino Jun’ichirō (1914–1988), a prolific and much-loved master of modern Japanese printmaking. Unfortunately, for what we can best describe as logistic reasons, we were not yet able to include Robert Schaap and Glenn van den Bosch’ checklist of Keisai Eisen’s print series. However, we trust it will be a major feature of Andon 105.
Andon’s editorial team would like to wish you a healthy and prosperous Year of the Dog. We relish the idea that, thanks to the new SJA website, you can now take Andon with you, wherever you go. 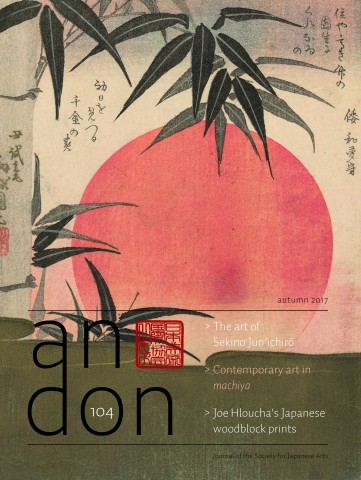