EDITORIAL: Several of the contributors to Andon 106 took up the issue of ‘self and other’. In the case of Larisa Alwin’s investigation of Kiyochika caricatures, the ‘other’ is the Russian enemy. Dieuwke Eijer introduces us to the strange creatures Wasōbei, the ‘Japanese Gulliver’, meets on his travels. For Philo Ouweleen, who writes about photographers and the 2011 triple disaster, the ‘other’ is nature at its most cruel. Travis Seifman discusses Hokusai’s Eight views of Ryūkyū, presenting an island kingdom both exotic and familiar, and Victor Schmidt’s zuihitsu describes western perspective prints, whose message is rather lost in transmission. Marije Jansen contributes a thought-provoking article about printing strategies using Hiroshige’s ‘A sudden shower over Ōhashi and Atake’ as a case study. Jos Vos’ offers a literary view of the concept of mitate.

Andon’s editorial team hopes you will enjoy reading # 106 and wishes you a healthy and prosperous Year of the Pig. 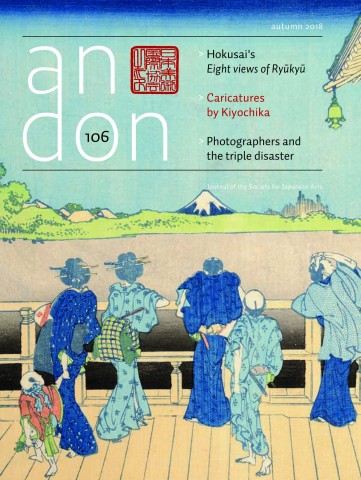