EDITORIAL: With the present issue, the editorial team says goodbye to Robert Schaap, who is joining our Advisory Board, and welcomes Doreen Mueller. Robert has been a long-standing member of our team and we cannot thank him enough for his unwearied exertions in Andon’s behalf. Doreen, our new member, is a lecturer in the department of Japanese Studies at Leiden University, specialising in the visual arts and material culture of Japan. She is greatly looking forward to working with us and we are very happy to have her on board. We also say goodbye to our most loyal advertiser, Aalderink Oriental Art of Amsterdam. Aalderink has supported Andon from its very beginning and both the SJA Board and the Andon team would like to express their profound gratitude to Mr W. Bouwman, the owner of Aalderink, for the many years of faithful sponsorship.

Andon 107 is, I think, a wonderful mixed bag of contributions ranging from late Edo-period editions of the ever-popular Water margin (Frank Witkam) to transgender issues in avant-garde film (Asa Splinter), via display for sencha (Ai Fukunaga), Eisen’s bijin-ga (Sawako Takemura Chang), and Ikeda Harumasa’s reclusion at Yugaji (Beatrice Shoemaker). Marije Jansen’s zuihitsu introduces us to the phenomenon of sasabeni lips, and Doreen Mueller makes her Andon debut with a review of McKelway and Trinh’s Rosetsu catalogue. We hope you will read it with pleasure! 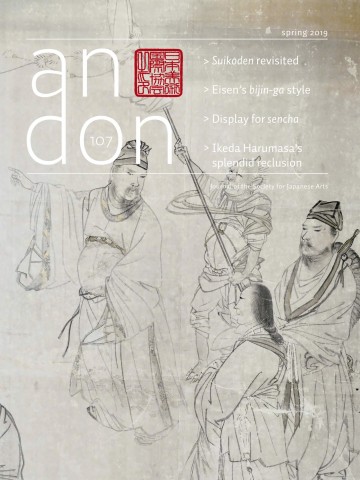