EDITORIAL:  Questions regarding gender roles and intercultural adoption and adaptation are very much part of the Zeitgeist. It is therefore not at all surprising that these subjects are also taken up by scholars studying the arts of Japan, and are increasingly finding their way to Andon.

Two contributions to our winter issue of this year testify to scholars’ current fascination with cultural interaction. The first is a king-size article by Donatella Failla on Chinese bronze vases imported into Japan during the medieval period, and their significance as Buddhist altar vessels and, later, as collectibles for flower masters and tea men. The second is Beatrice Shoemaker’s zuihitsu, which tells the story of the journey of a Meiji-era teahouse from Kyoto to London, and subsequently to Lockwood, New Jersey.

Manuela Coldesina and Giulia Baquè address the topic of gender norms with their article on elements of performance and subversion within shunga, using Utamaro’s Negai no itoguchi as a case study.

Tina Dermois discusses print designer Tsukioka Kōgyo’s role in the re-positioning of the No theatre after it had lost its traditional patronage as a result of the Meiji Restoration, and, on behalf of the Andon team, Marije Jansen spoke with collector Elise Wessels on the occasion of the 10th anniversary of museum Nihon no hanga. Looking at the contributors to Andon 108, I am pleasantly surprised to find that this may be our very first all-female issue!

The Andon team wishes you all a festive end-of-year season, and a happy and healthy Year of the Rat. 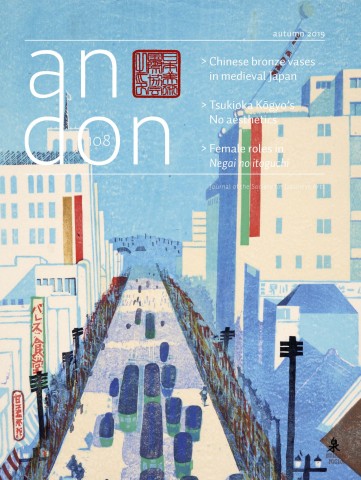