EDITORIAL: In this issue, Ellis Tinios introduces to us the aspect of age in the portrayal of actors of the kabuki stage. More specifically, his contribution deals with the immensely popular actor Ichikawa Danjūrō VII. Prints of this actor were bought by a large audience. As we know, e.g. from contemporary books, the depiction of actors was standardized to a high degree. This was only necessary if the popular stars of the stage would have to be identified and recognized by the popular public. (And in this way these portraits compare to some extent with the caricatures of politicians in our newspapers and magazines). Age, and especially high age, is an important feat in Japan. An artist like Hokusai - who lived to be ninety -already refers to himself as röjin, 'old man', in 1805, in his forty-sixth year. Even though ukiyoe, concerned with daily life and events that pass by, may be the best-suited genre to closely follow gradual ageing, similar conventions to render old age as Mr. Tinios discusses here must have been common. It would only be likely that they were applied elsewhere too, not only in other genres of painting but also, for example, in netsuke carving.
In addition to contributions on this aspecl, I would also welcome notes on specifically stated age in combination with artists' signatures. When, for example, do artists or writers start giving their age? As seventy, eighty, or even much earlier? And would anybody know of younger 'oid men' than Hokusai, i.e. under forty-six? 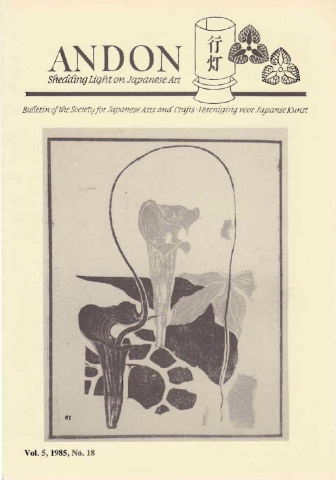