EDITORIAL: In this issue, Cynthia Viallé deals with three early collections of Japanese lacquerware. The collectors, already introduced in a previous issue, were amateurs in the sense that they were not experts, collecting without any preliminary knowledge of the subject. Moreover, their stay in Japan would be predictably short. And then, just imagine that they chose not to restrict themselves to lacquerworks exclusively.
Taking the numerous drawbacks into consideration, it is all the more surprising that they actually managed to form such extensive and comprehensive collections. In regard to this, it also should be realized that these men were largely directed by money: their modest means and, on the other hand, the profit they eventually hoped to make by selling their collections. Brought together under these circumstances, the homogeneity of the assembIed collections makes us realize once again that collecting art(efacts) is an art itself. It is Iherefore a fortunate circumstance that the three collections have remained largely intact and together until this day, accessible for further study and research. 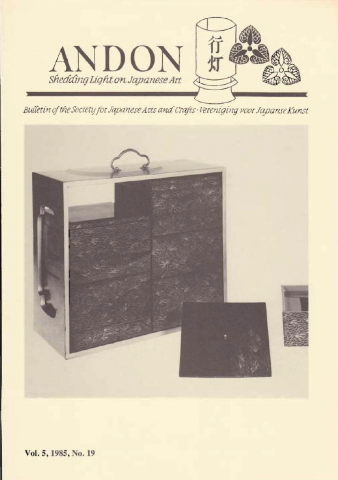