EDITORIAL: The present issue of Andon, starting a new year, features a most interesting essay by Marco Fagioli on Kuniyoshi's drawings. Not only is this the first contribution on Japanese drawings ever to have been published in Andon, it also deals with the essential problems of attributive criteria. Following the earlier discussions on this theme - then connected with printed works of art - by Van der Tweel (Andon, nos. 6 and 11) and Richard Lane (Andon, no. 7), such can surely be characterized as a brave gesture. Now that this discussion seems to be taken up again, I fervently hope that it may, indeed, lead to some agreement upon generally acceptable characteristics. So, please, let anybody with some opinion on the subject join in the discussion. For the benefit of our readership, such contributions may deal with netsuke, swords, lacquerwork, paintings, ceramics, etc. ln netsuke, for example, carvers usually had a predilection for specific materiais, such as wood or ivory. But, if two artists of the name Mitsuhara would seem sufficiently distinguished by a preference for ivory animal subjects and figures in wood respectively, what to do with a wooden rat with this signature? What other aspects should then be taken into consideration? Are there certain mannerisms in the carving of ivory which would betray him working in wood, or vice versa, and when would there be sufficient evidence to distinguish a third artist of this name? Problems such as this one are fust bound to appear in all ranges of Japanese art and, apart form being highly intriguing, they make our field such an interesting and lively one. 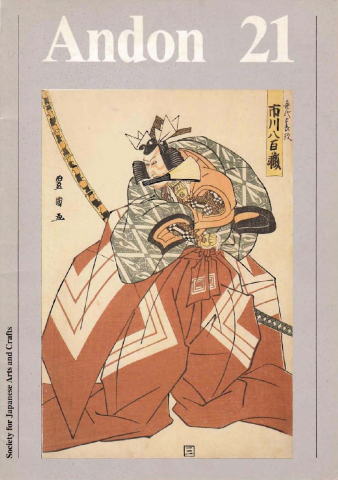