EDITORIAL: Although any well-sustained view on the Toyokuni/Toyoshige/Kunisada argument is still welcomed, anybody trying to find definitive proof in the memorial stone erected for Toyokuni by his pupils in 1828 is herewith discouraged to make the journey. Both David Caplan and some Tōkyō friends of the Bickfords have been so kind as to try and locate the stone, but both of them failed. It appears that the area, including the Yanagishima Myōkenzan Hossyōji temple where the stone was erected, suffered heavily from the American bombardments at the close of World War II. During the recent construction of a new road near the temple, workers did find some stone underground, but this had already been destroyed. Anyway, we have to be grateful for their serious
efforts in providing at least one potential piece of evidence.

Somewhat related - though not touching on this very subject - is Ellis Tinios' study of Kunisada's portrayals of actors in female roles, the so-called onnagata, presented in this issue of Andon. As a continuation or rather a parallel study of this writer's earlier work on Kunisada representing actors at various periods of their life and career, I am quite confident that this will stimulate closer attention to the great skills of artists of the nineteenth century. Jack Hillíer is represented in this issue as the cook who admits us all into his kitchen: we are given a frank view of how mistakes come into the world, but also of how they are corrected. 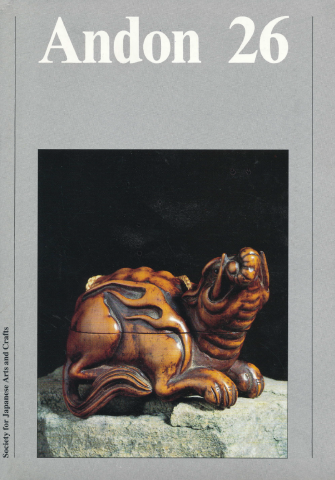