EDITORIAL: The front cover features only one example of ingenuousness to be encountered in netsuke: the kagamibuta-type. Another example of the variety that makes netsuke to such a delightful field for collectors and students are the porcelain netsuke. Like the kagamibuta-type, they combine the expertise craftmanship of a different craft with the taste of the public for these miniature objects. David King in this issue presents a large group of these porcelain netsuke, all brought together in the early nineteenth century, their early dating well-documented by the collectors themselves. William Green in his contribution discusses a rare example of a signed print by Sukenobu. That the subject ís a theatrical one only adds to its rarity. As a result of the Society's anniversary exhibition, Jan Dees tracks down a number of stationery boxes by Akatsuka Jitoku, presented to various courts early this century. This may well serve to better document those items which, as Dees demonstrates, are likely to appear on the market within the next few years. The last article in this varied issue expands on a series of Shunman surimono of which a fifth image was discussed already earlier (Andon, no. 26) by Paul Schweitzer. Here, Jan Willem Goslings attempts to reconstruct the connections between the poets involved. 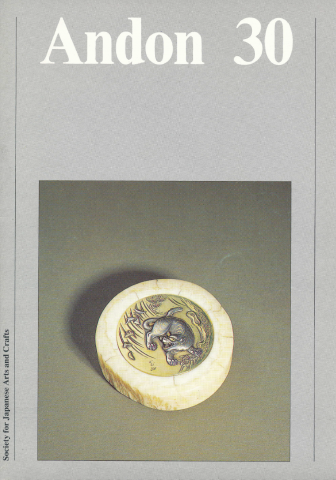