EDITORIAL: Whereas Andon 33 concentrated on prints, this issue presents a greater variety of subiects: paintings, lacquerware as well as prints. Professor Oikawa reports on the results of his trips, together with his colleague professor Yamaguchi, along private and museum collections in Europe and the USA in order to study the paintings of Kawanabe Kyōsai. Numerous works by Kyōsai can be found in Western collections due to his connections with foreigners in Meiji Japan, like Guimet, Régamey and von Bälz. The influencial British architect Josiah Conder even became Kyōsai's pupil. As we know from his previous articles, surimono - small, delicate prints commissioned by rich individuals and poetry circles - are Jan Willem Goslings' favourite subject. Here he describes two small-size shunga albums and raises the question whether these erotic prints could in any way be linked with surimono. Prussian blue was introduced to Japanese prints in 1829. A few other early blue pigments can only be distinguished from Prussian blue by a chemical test which, however, may be harmful to the print. The late Rochelle Wexler Bickford discovered a non-invasive test, simply by exposing the print to an incandescent black light source: only Prussian blue appears as a bright blue colour. Gold engraving in lacquerware (chinkinbori) has been considered a specific product of the Wajima region. Data of one hundred pieces described in the literature, however, show that chinkinbori was also integrated in 'main stream' lacquer art of the Tokugawa era. On the other hand its Chinese origin can still be perceived. The conclusion of my own contribution to this issue is that chinkinbori was a semi-Japanized lacquering technique. Finally, Richard Lane has written a reaction to Richard Kruml's article 'The birth of kentō'. According to Lane this registration guide in colour printíng was first applied in Japanese books in the early 17th century - as was also stated by Kruml. He futher goes into the origin of the term kentō. 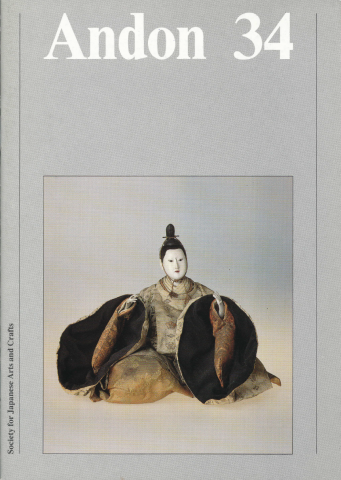