EDITORIAL: The tetsubin, the charming cast-iron waterkettle, emerged during the late Tokugawa period when sencha, the Chinese way of drinking tea, became popular among intellectuals. As P.L.W. Arts points out in his article, the tetsubin-manufacture expanded during the Meiji era as a result of the adoption of Western techniques to produce pig-iron. Jan van Doesburg focuses on chûban-size Osaka prints, usually featuring bust-portraits of kabuki actors. In contrast to statements in the literature the author convincingly shows that these prints were already produced before the Tempô Reform of 1842. He could trace no less than 120 examples between 1800 and the early 1840s. Hasegawa Sakae investigated the role of the Kiritsu Crafts and Trading Company in the preservation of the applied arts during the turbulent Meiji era. Leading artists started their career as employees of this government-sponsored organisation. The participation of the Kiritsu Company to a series of World Fairs had considerable impact on the acquaintance of the West with Japanese arts. Finally, R. de Bruijn, who has been a regular contributor to Andon for ten years, discusses two rare prints by Hokusai. 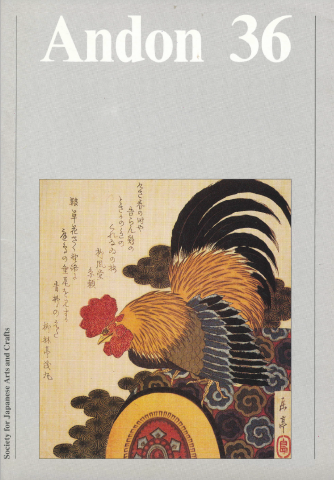