EDITORIAL: Dieuwke Eijer was the first student of Japanology to receive a grant from The Heinz Kaempfer Fund. Her research visit to Geneva resulted in the present articIe on kagamibuta-netsuke with the signature Shûraku. Ozawa Shûraku was an outstanding maker of kagamibuta, but there is confusion about his identity since other metal artists used the name Shûraku as well. Ms Eijer has solved this problem to a great extent. Egoyomi or calendar prints indicate the sequence of the long and short month of a particular year in their design. Jan Willem Goslings points out that also surimono and even a few shunga exist which show such calendars. An expert on Kunisada, Ellis Tinios concentrates on half-length actor portraits with the Kunisada signature in his contribution. Sofar, he has been able to identífy no less than 173 of these prints, which were mostly published, in sets, between 1813 and 1842. Although this is a substantial number, it represents only a small proportion of Kunisada's entire work. For example, in the last two decades of his career, when he signed Toyokuni, many more half-length actor prints were produced, with a staggering peak in 1852, when some 450 of such prints were published!

This issue of Andon concludes my two-year term as managing editor, which was meant to restore the continuity of its publication. I feel confident that Henk Herwig, who has taken over, will make further improvements. 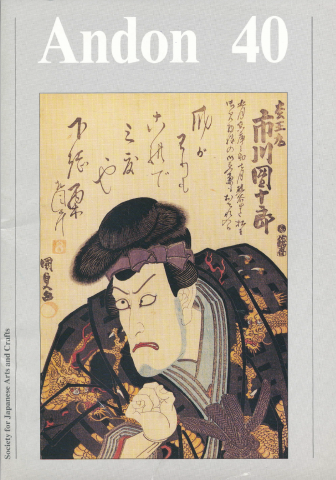