EDITORIAL: Several of our members may have seen the exhibítion of Japanese and Chinese cloisonné, from a Dutch private collection, that was held last year at the Museum 'Het Princessehof' in Leeuwarden. Not only did the artistic merits please the eye, but also the technical aspects were interesting. Sandra Borstlap, who organised the exhibition, has been asked to tell us how the technique of enamelling, introduced mainly via China at the end of the sixteenth century, developed its own characteristics in Japan. The article will surely increase appreciation of this particular genre of Japanese art, which has been rather neglected so far. The second article is a continuation of the series 'Once upon a time....' by Arendie Kempers. This time it deals with the comings and goings of Watanabe no Tsuna, another popular Japanese hero who has inspired many playwrights and woodblock artists. In the previous issue of Andon we asked members of our Society to bring their burning questions into the limelight. There is a first beginning but it would make the column a more animated exchange of ideas if you now put your reactions on paper, and send them to your eager editor. 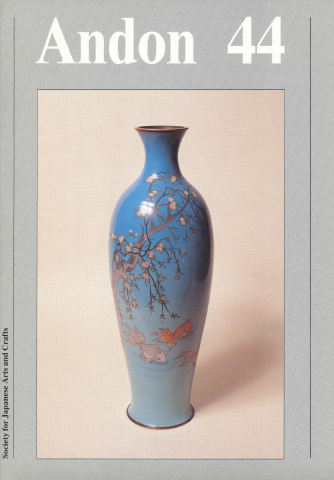