EDITORIAL: When ín the second half of the nineteenth century Japanese objects and artifacts were exhibited at fairs and in curiosity shops in Europe and America they caused a real Japan craze. The Japanese, however, had already experienced a similar fascination at the end of the sixteenth century when the first European objects were brought to Japan by the Portuguese. Wearing Portuguese costumes decorated with crucifixes and rosaries became fashionable for the beaux and belles of Kyoto. In his article Marten Dorhout díscusses the influence of the early - pre-Perry - contacts between the European civilization and Japan on Japanese pictorial art. Goíng through piles of sixteenth and seventeenth century European pictures he found several examples, so far unknown, that could have inspired Japanese artists. If you blink your eyes at the idea that Masanobu might have been inspired by Rembrandt and Hokusai by Brueghel you should certainly read his account. Richard Lane comments on the half-hearted acceptance of  Hishikawa Moronobu by the Japanese and Ed Freis reports about a set of bijin prints by Tsunetomi, which is seldom seen complete. 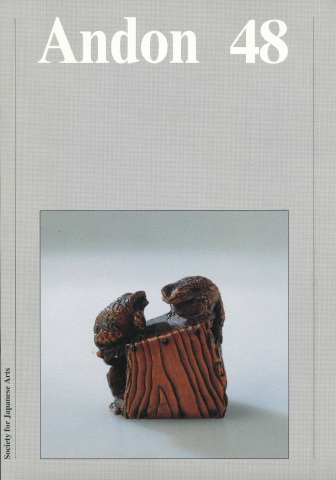