EDITORIAL: A shoal of red herrings..... When I looked up the meaning of red herrings in my dictionary it appeared to be very appropriatefor the 'Large Fish' series designed by Hiroshige. It takes some courage to catalogue this popular series from which so many editions have been published. Richard Kruml has accepted the challenge. As a result we now have a Kruml's Verzeichnis on Hiroshige's 'Large Fish' series. It will probably not be the last word on the series and new variations may still be discovered, perhaps in your own collection. But now at last we have a frame of reference. Of interest ís also Oikawa Shigeru's review of the Kawanabe Kyôsai exhibition held in the British Museum at the beginning of this year. He discusses not only the artistic qualities of the demon of painting but also the influence of Western taste on the rehabilitation of Japanese artists such as Sharaku, Jakuchû, Yoshitoshi and Kyôsai in their own country. In a brief contribution Richard Lane makes a valiant attempt to bridge the gap between print- and netsuke-lovers. 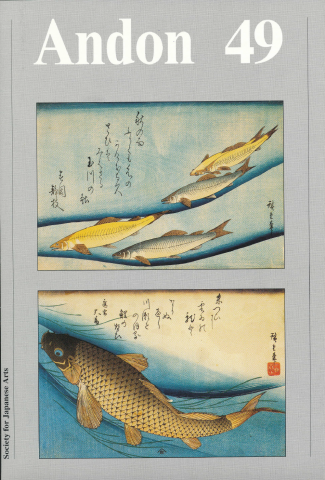