EDITORIAL: Last year the well-known Japanese woodblock artist Toshi Yoshida died. Eugene Skibbe, who can be considered the chronicler of the Yoshida family, reflects on the significant role Toshi played in the Yoshida family and in the history of modern Japanese prints.
Lawrence Bickford, who was taught traditional woodblock printing techniques by Toshi Yoshida in the sixties, once more - but this time definitely for the last time - tries to convince us that Succo's speculations regarding Toyokuni II were incorrect. In a comprehensive review of current research topics, Richard Lane ruminates philosophically over the impending computerization of ukiyo-e studies, comments on the role of collectors and on changing tastes in ukiyo-e, and broaches certain interesting 'gender problems'. 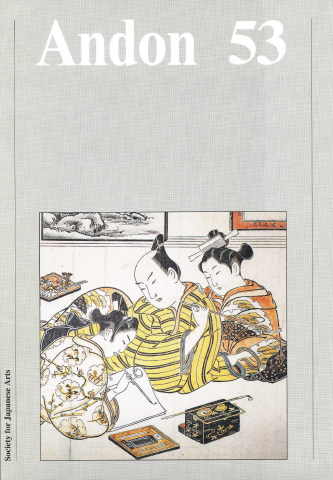