EDITORIAL: First I want to welcome Ms. Guita Winkel as a new member of the editorial board of Andon. She is a graduate in Japanese Studies from Leiden University, and currently she is preparing a thesis on Santō Kyōden. We hope that she will contribute to the diversity and quality of our bulletin.

In November last year Yoshida Hodaka died unexpectedly in Tokyo. He came from a talented family of artists and Eugene Skibbe - more or less the chronicler of the Yoshida family - looks back on the artistic oeuvre of this distinguished artist whose career was strongly inspired by primitive art.

Studying prints of Kuniyoshi's Taiheiki Eiyūden series, Elena Varshavskaya became intrigued by a print where the person depicted looked more like a philosopher or an astronomer than a warrior. She did some further research on the subject and came up with an interesting article about the celestial globe as an attribute of military strategists.

The origin of several lacquer chests, pipe cases and hair ornaments made by Yanagaisawa lppō was traced by Jan Dees and Koos van Daalen and they discuss the origin of the striking green ground that was used for one of the chests.

Last but not least Hendrick Lühl tries to convince us - in a reply to Dr. Bickford' s article 'The Toyokuni signature confusion' published in Andon 53 - that prints made between 1 / 1825 and 11 / 1835 and signed 'Toyokuni 'or 'Kosotei Toyokuni' were made by one and the same person, namely Toyoshige = Toyokuni II. 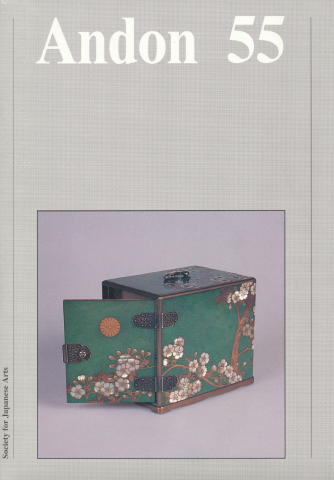