EDITORIAL: The Berlin Wall did not only separate countries, but was also an obstacle to the free communication about art. Though it was known that many interesting collections of Japanese art existed in the Eastern European countries and in Russia, they were hardly acccessible to Westerners. The countries themselves lacked financial resources to conserve, study or display their treasures. Fortunately the situation is improving and gradually catalogues and articles on those collections are appearing. In this respect good work has been done by the Intenational Research Center for Japanese Studies that recently published five detailed catalogues on Japanese art from several museums in Russia, the Czech Republic and Hongary. We have in this issue of Andon a contribution by Pililip Suchomel, chief curator and director of the Museum of Oriental Arts in Prague. He researched the works of Makuzu Kozan preserved in Czech collections and found some interesting material on the dating of works from Kozan' s ceramics studio. We are very pleased with his scholarly contribution and we would like to encourage other scholars and collectors in those countries to join our Society.

In the series 'Once upon a time .. .' Arendie Kempers gives another personal account. It is about the dramatic love story between Endo Moritō and Kesa Gozen, a tale that inspired many Japanese artists and kabuki playwrights. After reading this story you can never imagine Nachi waterfall without the austere priest Mongaku doing penance.

We have another never ending story: the one about the 'zigzag Toyokuni' signature. It never fails to raise emotions, and though we intended to close the discussion, we felt we could not withhold from you the response of Lawrence Bickford to Hendrick
Lühl's comments on the Toyokuni confusion. 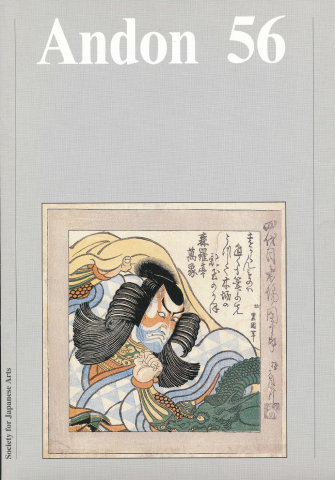