EDITORIAL: In 1911 the Japanese Emperor presented a magnificent lacquer cabinet decorated with peacocks and flowering azaleas to Queen Mary, on the occasion of her coronation. Jan Dees was permitted to study this cabinet, now in Buckingham Palace, and discovered that the maker was Jan's favourite lacquer artist, Akatsuka Jitoku. Another interesting piece of research was undertaken by Dr. T. Volker as early as forty-five years ago. He studied Japanese prints of a Tōkaidō-set designed by Kuniyoshi, Hiroshige and Kunisada and published his findings in Dutch in the forerunner of Andon, the Bulletin van de Vereniging voor Japansche Grafiek en Kleinkunst. Rob the Bruijn has now fulfilled his promise done in the first issue of Andon (1981) to translate this article and to supplement it with his own findings. His advanced age makes his contribution the more to be respected. The results of a more recent investigation come from John Fiorillo, who discovered a previously unknown eighteenth century Osaka surimono designed by Shokosai. He gives us a detailed description of the actors depicted on the surimono and elaborates on Shokosai's place among the early Osaka printmakers. Last but not least the editor is happy to announce that Dr. Ellis Tinios has agreed to serve as an advisor to the editorial board of Andon. Dr. Tinios is a Sinologist by training, who 'discovered' Japanese art while studying ancient Chinese History at Kyoto University in 1977 / 78. After taking up the post of Lecturer in Asian History in the School of History, University of Leeds in 1978, he continued to pursue his interest in things Japanese. 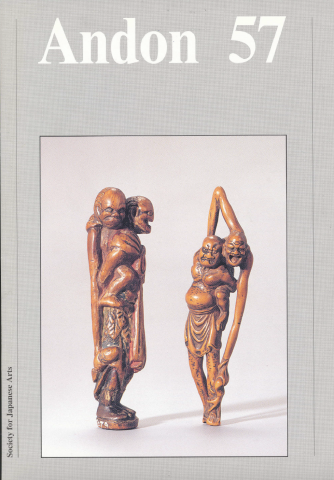