EDITORIAL: "... an odd remarkable sort of beggar's music, or rather chime of bells, we sometimes, but rarely, met with in our journey to court, and which is from the number of bells call'd Fatsio Canne, the chime or music of eight'. That' s how Engelbert Kaempfer in 1727 described his encounter with Japanese street musicians performing with the hachogane along the Tōkaidō. Onno Mensink has made a thorough study of this interesting instrument and tells us how and by whom the hachogane, whose sounds are no longer heard in Japan, was played. Foreigners describíng Japanese customs had their counterparts in Japanese depicting Chinese customs. That' s the subject of Ellis Tinios' article. Japan has had a long history of interaction with China and her cultural debt to China is immense. The mustard seed garden manual, anthologies of Chinese poetry and colloquial Chinese fiction have been an inspiration for many Japanese artists although there was no first hand knowledge of China due to a rigorously enforced ban on foreign travel. In both articles the authors come up with prints designed by Hokusai to illustrate the subjects discussed. This master print designer is also the subject of Richard llling's article on the genuineness of drawings ascribed to Hokusai. It takes some courage to handle this tricky subject particularly because his ideas about a hanshita-e differ significantly from what has been generally accepted so far. I would encourage a further discussion on this subject. The genuineness and appreciation of paintings are
other subjects that may interest many of our members. Eric van den Ing has done some research on a Shuntei painting and discusses his findings. 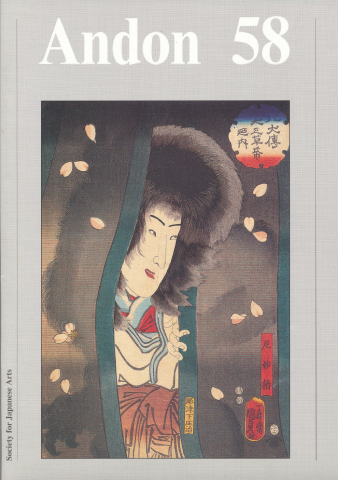