EDITORIAL: This year we are commemorating 400 years of relations between Holland and Japan. All over the country a large variety of activities is takíng place, such as planting a kaki tree in the Hortus Botanicus in Leiden, musical performances, sport manifestations, ikebana shows, go matches, and, of course, a large number of exhibitions on Japanese art. Not to be missed is the splendid exhibition 'Holland, Japan & De Liefde' at the Rijksmuseum voor Volkenkunde in Leiden. In the Groninger Museum there is wonderful exhibition of Fuji prints from our member Marten Dorhout. From September on an exhibition of Japanese Art from Dutch private collections, organized by our Society , will be held in the Westfries Museum in Hoorn. For this issue of Andon we also have several articles that reflect Dutch-Japanese interaction. Martha Chaiklin offers a new look at Nagasaki prints and Kris Schiermeyer shows how a western print, most likely brought to Japan by the Dutch, inspired Yoshitoshi for his well-known Yamauba and Kaidōmaru chiaroscuro design. In October another exhibition will open its doors in the Gemeente Museum in the Hague. Magda Kirova, who is preparing this exhibition about musical instruments depicted on Japanese prints, gives us a glimpse of what she has in store for us by elaborating on some interesting aspects of the musical instruments that are used in Nō performances. Last but not least we offer you a nice series of late Meiji prints, the four seasons, designed by Yamamoto Shoūn, provided with a commentary text by Frederick Harris. 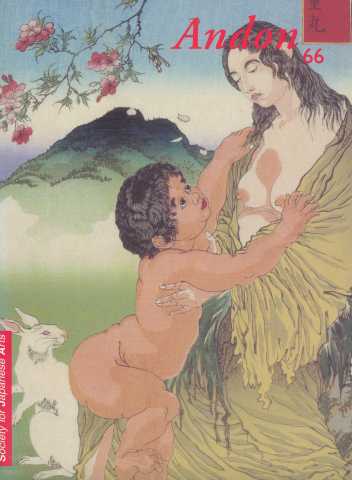