EDITORIAL: Pictures of handsome kabuki actors and beautiful courtesans are more diverting than pictures showing the hardships of daíly life. No wonder that in the time of the 'floatíng world' designers and publishers did not pay much attention to prints showing the sick and poor or the hardships of peasant life. Blind people, in particular, must have been a common sight in everyday life since feudal Japan was ravaged by epidemics of smallpox and other diseases and a great many people were afflicted with blindness. If they were lucky they could earn a living as musicians, storytellers or masseurs and as such we may encounter them in kabuki plays and on woodblock prints. William Green has made a remarkable study of woodblock prints depicting blind musicians. In a unique series he shows that ukiyo-e artists did not neglect this aspect of daily life and he convincingly underlines the obseraation of Toulouse-Lautrec that "Ugliness, no malter where it is, always has a beautiful side. It is fascinating to uncover beauty where no one else can see it" . An artist who has masterly uncovered the beauty of daily ugliness in Tokugawa Japan is Hokusai. He has placed the common man in the centre of his work. Fabienne Delpy elaborates on this aspect on the basis of Hokusai's Thirty-six views of Mount Fuji. She discusses how imaginary itineraries were used to show Mount Fuji from different points of view. In some designs Hokusai included the road itself and its travellers, in others he depicted genre scenes as they could have been witnessed from the road by travellers. She argues that Hokusai used his figures not only to give us 'snapshots' of daily life along the country roads but also cleverly used the fígures to guide the attention to the heart of the landscape. I hope this Andon may uncover beauty where you have not seen it before. 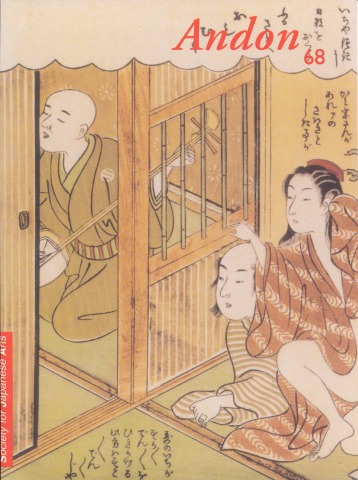