EDITORIAL: Several museums in Europe and the United States house signifícant collections of woodblock prints on the Sino-Japanese and Russo-Japanese wars. These prints were regarded more as documentary material, than as pieces of art and until quite recent were also considered simplified nationalistic propaganda. Filip Suchomel has studied the late nineteenth century woodblock triptychs on this theme housed in the National Gallery and the Náprstek Museum, both in Prague. In his contribution for Andon he puts these prints into a proper historical, political and artistic perspective. Of particular interest is his opinion why traditional woodblock printing techniques were used to promote the war operations in China and Korea instead of the less expensive Iithographic printing techniques which were widely available in Japan at the end of the late nineteenth century. To switch from sinking battleships to guidelines for the use of painting materials written down by Sukenobu in 1742 takes a little effort. Henry Kerlen has made a scholarly and extensively annotated translation of Sukenobu's text, which provides a revealing insight into how painting pigments were prepared and used in his days. You will appreciate the subtle differences in colour even more after reading his article. The last article is by Else Kress, who describes two rather unusual ceramic inrō. She explains the way the name of the artist is written and tells us more about his life. ln this year two thousend and two we present you with two reviews on the same book. Usually we have to request people to write a book review but not this time. Since they each offer a different, interesting point of view we considered it worthwhile to publish them both.

On behalf of the edítorial board I wish you a peaceful and healthy 2002 and I do hope there will be something in your line of interest in this issue of Andon.

Advertisements I
Contents
Lyricism amid the cannon salvos. A few notes on Japanese prints with the theme of the Sino-Japanese war in the collections of the National Gallery and Náprestek Museum in Prague
Philip Suchomel
Sukenobu's colours
Henry Kerlen
Two ceramic inrō by Ken'ya
Else Kress
Book reviews
Advertisements II 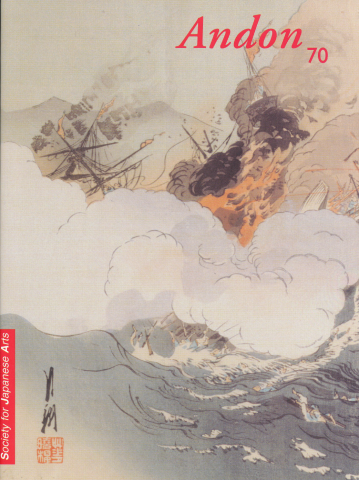