EDITORIAL: Women figure prominently in this issue of Andon. In his article John Fiorillo discusses how Eizan's early women portraits strongly reflected the style of his great predecessor Utamaro. However, when the views of beauty and fashion changed during the early decades of the nineteenth century, Eizan depicted his later women in a style that was uniquely his own.

Nanako Yamada goes into the details of a serial novel Stepmother, stepson that was published in the Osaka Daily News between August 1912 and April 1913. Every day, people, especially women, eagerly looked forward to reading this series. At the same time publishers produced attractive de-Iuxe books featuring the story, with colourful prints on the front covers. So far the artistic value of these popular woodcut front covers or kuchi-e has been neglected. The examples of kuchi-e that the author uses to illustrate the characters of Stepmother, stepson make us aware that these technically refined and interesting cultural artifacts deserve more praise. 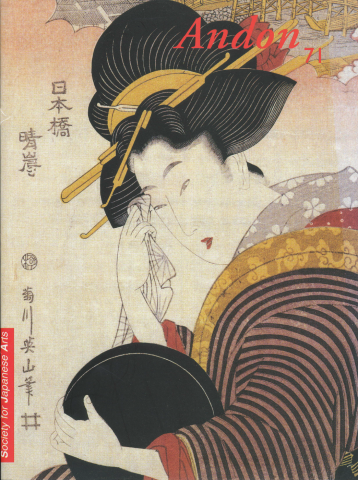