EDITORIAL: In the last quarter of the 19th century Paris was 'the place to be' if you were interested in Japanese art. Shiploads full of treasures were brought to the French capital and aficionados could hardly wait for them to be unwrapped. The brothers Edmond and Jules de Goncourt were amongst the first collectors, and became well known for their large colleclion of Japanese art. In 1881 Edmond published La Maison d'un Artiste in which he described his house and all the precious objects in it. Max Put retrieves this manifesto of aesthetics from oblivion and discusses de Goncourts' art criticism in relation to their perception of Japanese art. Among the Japanese artefacts shipped to Europe were many small-sized pieces of lacquer richly decorated with gold and silver. Without knowing their original purpose, people appreciated these petites féminins objects for their aesthetic qualities. Mónika Bincsik makes us aware that many of these miniature treasures are actually part of larger sets used in the incense culture and discloses the rituals of the 'way of incense' and incense games. There is more lacquer in Francesco Morena's contribution to the series 'hidden treasures', in which we pay attention to relatively unknown collections of Japanese art. This time he puts under the spotlight pieces of Chinese and Japanese lacquer collected by the dé Medici family, which are now housed in the Palazzo Pitti in Florence. This edition of Andon concludes with two other interesting contríbutions. One is a reaction to John Fiorillo's ireki article by Andreas Marks, who shows that there are in fact three different versions of the actor print under discussion. The other is Peter Ujlaki's long awaited review of the exhibition Kabuki Heroes on the Osaka Stage, 1780-1830. He not only praises the quality of the material shown but also points out that the exhibition re-calibrates the reputation of Osaka actor prints in Japan. 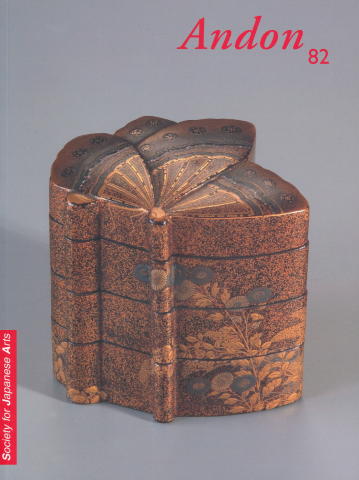