EDITORIAL: Over the last few months we have sadly witnessed how Japan was struck by an earthquake, followed by a devastating tsunami and the threat of nuclear radiation. We extend our heartfelt sympathy to everyone who has suffered personal loss and hope this issue of Andon may offer some consolation and inspiration. Ishigami Aki has examined Harunobu's erotic parody series Eight Fashionable Parlor Yiews and demonstrates how the artist cleverly layered puns into his desígns. It is thought unlikely that early collectors, who purchased these prints ín Paris after the opening-up of Japan in 1854, were aware of their double meanings. Manuela Moscatiello researched catalogues from 19th century Parisian auctions and identifies the dealers and collectors who were active in the market. She also illustrates how these public auctions contributed to the popularity of 'all things Japanese'. Among the early collectors of woodblock prints there was little interest in contemporary print designers Iike Yoshitoshi (1839-1892). Consequently his oeuvre received little scholarly attention until Roger Keyes, ín 1982, put the artist on the map again. Sheldon Siegel adds another piece to the Yoshitoshi puzzle by discussing a nine-sheet composition of Emperor Meiji's move from Kyoto to Edo in 1868. Yoshitoshi made this nonaptych as a reminder of this auspicious event even before he had seen the Emperor passing over the Kyōbashi Drum Bridge in Edo. This issue of Andon concludes with contributions by Jan Dees and Roger Keyes. Jan critically discusses, on the basis of recent auctions results, the latest trends in the field of inrō and netsuke, and Roger remembers, in a personal way, the great Ukiyo-e scholar Suzukí Jūzō. 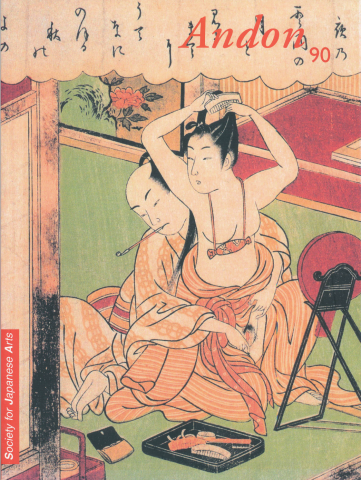