Due to the Corona restrictions no activities have been planned.

Every month a member of our Society will show one of his or her favourite Japanese artworks. This month Max Put tells us about his quest for further information on his 19th century Japanese photo of a blind boy. Long ago, at the PAN Artfair in Amsterdam, I acquired a 19th century Japanese photo of a blind boy with his mouth open against a painted landscape with mount Fuji. According to the dealer, it showed a blind singer. During the first lockdown I decided to try to find out who the photographer could have been. I took the photo out of its frame and noticed a scratched-in number 1024. I went on the internet to look for similar pictures and found that the boy had not been a singer, but a masseur (anma). Blind people often became masseurs in Japan, because of their good sense of touch and the fact that they couldn’t see their clients, and so weren’t prone to temptation.

I found several photos of blind masseurs, some by famous photographers like Raimund von Stillfried (1839-1911), who in the 1870s-1880s ran a photo-studio in Yokohama. In most of these the masseurs had similar attributes: a bamboo stick and a piece of cloth, but my picture was not among them. Maybe the painted backcloth would provide me with a clue.

I managed to find three scenes with the same backcloth (img. 2,3) attributed to the studio of Kusakabe Kimbei (1841-1934), a Japanese pupil of Von Stillfried. Kimbei took over negatives from Von Stillfried, who himself acquired some of the stock of Felice Beato (1832-1909). Many have scratched-in numbers and I consulted an old sales catalogue, but my photo did not match the description of 1024. I suspect however that it was indeed produced by Kimbei’s studio, which owned the backcloth in my photo.

While writing this I went on the internet again and to my surprise found another photo of a blind masseur, against the same backcloth. It also has a scratched-in number: 1023! I don’t think it shows the same boy, but the biggest difference is that he has his eyes closed, whereas ‘my’ masseur has his open. This confronts the spectator with the fact that they are really blind, which might be the reason why my photo is so rare. 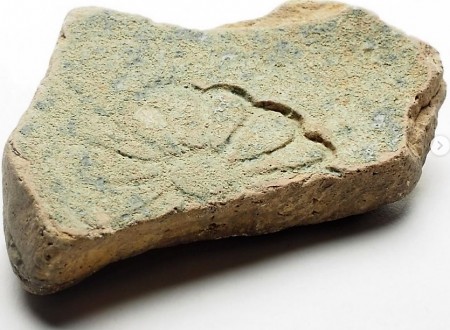